You are here: Home / NEXTblog / Why subtitling can be considered an art form. 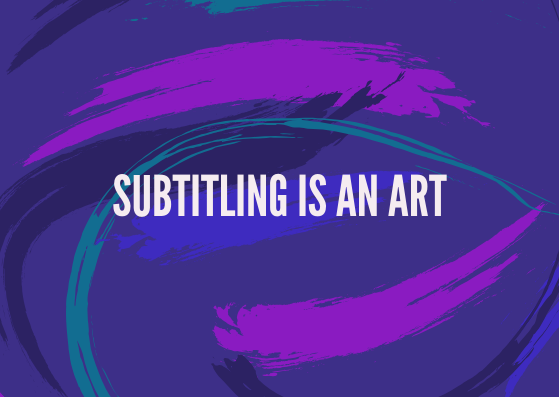 Why subtitling can be considered an art form.

“Due to the complex nature of subtitling, the subtitler must possess the musical ears of an interpreter, the stylistic sensitivity of a literary translator, the visual acuteness of a film cutter and the aesthetic sense of a book designer”. Henrik Gottlieb

If standard professional translation requires special skills and qualifications, subtitling is an even more complex task. It’s not just about studying languages, speaking multiple languages fluently, being a bilingual or a specialist in your areas of expertise… All that is great, but it’s not enough. In subtitling you don’t just transfer ideas and words to make them accessible to the reader in the target language.

Subtitlers carry a message and stand in between cultural settings, straddling the languages they work with the way simultaneous interpreters do. They have a profound knowledge of idioms and slang both in the source and target languages. What we do is somewhat related to the way humans naturally communicate and it’s as if any two people (the original dialogist and the subtitler) were meeting and having any conversation and/or reporting an event or an anecdote. One of these two people then meets a third person (our viewer) who, of course, is not aware of what has been said or what has happened. The content of their conversation and/or the anecdote is then transferred to this third person. The way in which the content is transferred will have to take into account who the third person is, their background and experience (the language and culture of the viewer) because that’s the only way our communication will be immediately understood (within the few seconds of exposure of individual subtitles). Therefore, we will use sentences and ad hoc expressions that are certainly different from those pronounced in the original language but that will still keep any inherent message or nuance unaltered. Our interlocutor will thus be correctly informed.

Due to time constraints and character limits, subtitlers therefore have to condense dialog without losing the essence of it and still convey every single little nuance while being aware that, when it comes to rewriting dialogues, there can be no perfect equivalence without any difference. It is precisely in that effort that they will call upon all their creativity and ingenuity that would not be triggered otherwise and would have no way of expressing themselves in other scenarios.

Besides, subtitlers have to be proficient in spotting and timecode content based on the international subtitling guidelines. They have to determine with utmost accuracy when exactly a subtitle should go on and off the screen following speech rhythm. They make sure subtitles don’t go over scene or shot changes wherever possible. They have to use straightforward syntactical units and distribute text from line to line in sense blocks and grammatical units. They have to allow for a comfortable reading speed and determine the best exposure times for subtitles. They have to be tech savvy enough as to use a professional subtitling software (eg. SubtitleNEXT)

For all these reasons, subtitling can be recognized as an art form in its own right.

“You get paid to watch movies” is a hoax

Many people seem to think that subtitling is a fun and playful job. That idea has certainly something to do with the spread of the fansubbing phenomenon, which, however, has nothing to do with professional subtitling (that would be material for another post).

There is a common misconception that you spend all day watching movies and TV series and you even get paid to do so. It’s kind of crazy to imagine that such a possibility may exist, isn’t it? But anyway the reality is completely different, because, when someone watches a film or a series, they select their favorite genre, actors and directors, they watch their favorite content in their free time to unwind and relax. The life of a professional subtitler is anything but relaxing.

If you consider that the turnaround of a subtitled feature film (timecoding plus translation), is now close to five (5) working days and that, on average, you’re required to subtitle one TV series episode within a couple of days, there really is no time to relax. Besides, working on productions you really enjoy is a rare event and, even when that happens, especially if these are high quality productions that invest good money in good scripts and characters, after subtitling three seasons of the same TV series, you end up knowing your characters so well that you can even predict their lines, you might even dream about them in your sleep or hope that sooner or later the main character dies just to put an end to it all, an expectation that is the exact opposite to the one their fans have who, on the contrary, are hoping their hero becomes immortal at some point.

Then there are documentaries that tend to be very wordy without any action or soundtrack and their entire runtime is covered by content needing translation and timecoding (narrator plus interviews). They might be interesting when they happen to cover your personal interests, but if that’s not the case, they can be extremely boring.

In a nutshell, what we do is not channel zapping on the couch and working conditions are far from ideal in that you often have to deal with overlapping projects and deadlines.

Subtitling is a highly specialized job both from linguistic and technical perspectives. It is a job, a profession and also an art.