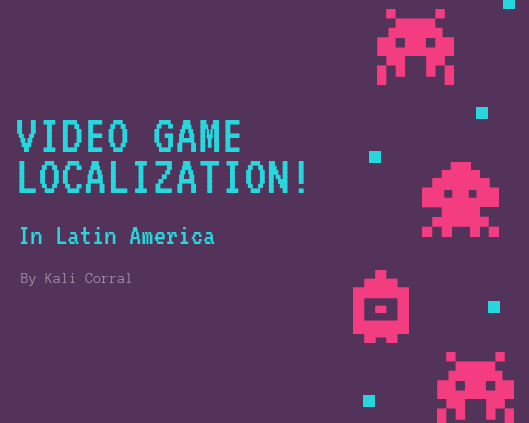 The market for Latin American video game translation has increased over the years, and as a localization translation specialist, there are various aspects I have observed along the way. Let’s discuss them briefly.

First, the dialect variant and how translation agencies resolve this. Latin America consists of 20 different countries (well, one could say 19, in Brazil they speak Portuguese), and in each country people speak a different dialect and, in each country, there can be a lot of different variants of it. In Europe you only have one.   So, when we translate, we must aim to the so called “neutral” Spanish, which in reality doesn’t exist, but it rather refers to a balanced Spanish with almost zero regionalisms but at the same time, natural and understandable by everyone. We have to be very careful in many ways, as there are a lot of words that in one country are OK, but in another they are offensive words (like “papaya”, a fruit, but in some countries, it refers to the vulva; or like “concha”, a sea shell, meaning the same as the previous one in some regions).

The difficulty to achieve balance is high and in my experience the agencies are blind to this, diminishing our work in different ways: telling us to “adapt” from the Euro version, or way worse, having our Euro colleagues edit and “adapt” for the Latin American version! This comes from the uninformed perspective that the Euro Spanish is “the” Spanish (idioms and all), thus everyone everywhere must understand it and this is certainly not the case.

There is also the matter about rates, which are extremely low, especially for all the work we have to do (for example, if it’s a dubbing project, we always have to include entering time codes of each dialogue) and that they demand everything as urgent but refuse to pay extra for the urgency, they think it’s our obligation to comply to this abuse. And when a Euro company opens an office in Mexico, with time (sometimes more, sometimes less) this new branch succumbs to an evil that dominates Mexican agencies: nepotism. They also lower the rates, exploit the translators more, and never offer them ongoing training.

I have observed that when a manager creates a translation team with translators from different Latin American countries, and encourage them to communicate between them (that’s another matter, they like to keep us blind and not talking to each other), the quality of the delivered work is way better! A Mexican translator might not be spotting a regionalism and a Colombian or Argentinian or Chilean one could, or the other way around, that way we can fix it and improve it. Video game localization for this region would highly improve if more companies and managers did this.

About how we learn how to do this: at least in Mexico, where I’m from and so far, it has to be self-taught because until very recently, this specialization was only available in very expensive universities (for rich people) so you had to investigate and learn by yourself (the same goes for dubbing and subtitling). Let’s not go further than this, the Translation Bachelor’s Degree at a public university just opened last year. I’ll dare to say that almost all Mexican Audiovisual Translators come from Linguistics (like myself) or Literature, then self-taught. Only a few of us come from the private universities. And talking to my peers from other countries I discovered this is not the case in countries like Chile or Colombia and I find this extremely curious as almost all Audiovisual translation is done in Mexico (and almost all translation professionals are Mexican).

Video game players can notice the difference between Euro and LATAM Spanish, as the use and idioms are quite distinct. They can also notice between a good translation and a bad one (even if they can’t say exactly what or why, but the speakers always sense this), and this is why we alongside the agencies must care about delivering quality to the audience, we owe it to them.